We’re revealing the 7th Edition winners in a final event in Porto, Portugal! 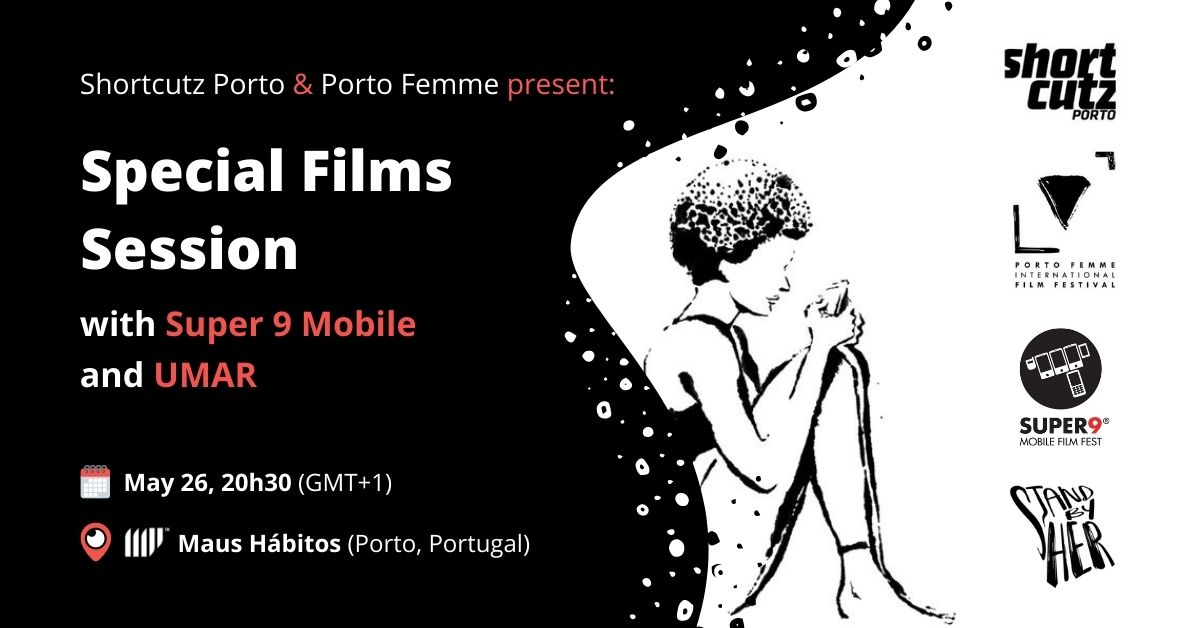 We’re soon revealing the winners of the 7th Super 9 Mobile Film Fest edition in a special event in the beautiful city of Porto, Portugal!!
Super 9 Mobile will be joining Shortcutz Porto and PORTO FEMME – International Film Festival for a special films session at Maus Hábitos – Espaço de Intervenção Cultural.
All info, agenda, and details in the description below.
For those who can’t make it to our physical event, we’ll be also revealing the winners on our Super 9 Mobile website and online channels soon.

Shortcutz Porto & Porto Femme are partnering on May 26 and are bringing you a special session!
We’ll be presenting you the award winners of Super 9 Mobile Film Fest 7th Edition (2020/21) and UMAR’s campaign ‘Stand By Her’.

What’s on the agenda?

On this special occasion, together with Shortcutz Porto and Porto Femme, Super 9 Mobile will be presenting the winners of its 7th Edition.
Super 9 Mobile is a Portuguese and international film festival completely dedicated to films recorded or animated on mobile devices such as smartphones or tablets. Founded in 2014, Super 9 Mobile is the first mobile film festival in Portugal and runs completely online on www.super9mobile.com. Because of the ongoing confinement, many of the films for this Super 9 Mobile edition are centered on the pandemic. Along the year, Super 9 Mobile has been partnering with Maus Hábitos and Saco Azul, having had their support promoting many films on their platforms.

Shortcutz Porto and Porto Femme are also inviting Lia Mendes from UMAR (União de Mulheres Alternativa e Resposta), who will present Ana Moreira’s video that she directed for UMAR’s campaign ‘Stand By Her’.
The ‘Stand By Her’ campaign aims at raising awareness on how we can be active bystanders fighting harassment. According to one of the most recent studies from the European Union Agency for Fundamental Rights (FRA), which included interviews with 42.000 women from the 27 EU Member-States, sexual harassment is the most prominent form of violence against women and girls.

CHAOS CINEMA MANIFEST: WHERE THE CINEMA IS SUBJECT

Mmmm... Nice and warm 🍪🍪🍪 are a good snack to improve your film crew's performance!

Our website also uses cookies to ensure better performance. By clicking “Accept”, you consent to their use.
.
ACCEPT
Manage consent

This website uses cookies to improve your experience while you navigate through the website. Out of these, the cookies that are categorized as necessary are stored on your browser as they are essential for the working of basic functionalities of the website. We also use third-party cookies that help us analyze and understand how you use this website. These cookies will be stored in your browser only with your consent. You also have the option to opt-out of these cookies. But opting out of some of these cookies may affect your browsing experience.
Necessary Always Enabled
Necessary cookies are absolutely essential for the website to function properly. This category only includes cookies that ensures basic functionalities and security features of the website. These cookies do not store any personal information.
Non-necessary
Any cookies that may not be particularly necessary for the website to function and is used specifically to collect user personal data via analytics, ads, other embedded contents are termed as non-necessary cookies. It is mandatory to procure user consent prior to running these cookies on your website.
SAVE & ACCEPT